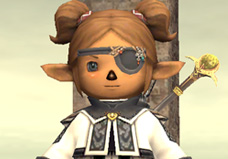 After thinking that the Moblin Maze would never come out, I finally found it was up and running and decided to try it out first with just Orophen and then with the rest of my LS. Doing it as a duo was incredibly hard. Orophen and I were 75 BRD and 75 RNG and then we tried again as 75 RNG and then 63 BLU. We were first beaten up hardcore by elementals and then by some other mob. It was really sad and frustrating, because I was slightly hoping for a place to duo or trio with my friends.

Anyway, we went into it the next day with Hiroshiko being a level 60 something SCH and had a much easier time with a full party. There was even a HUGE crate inside that had some medicine in, which would have been nicer if it showed up more often. The eye patch comes from the MMM, and you only need 10 marbles for it! Though now I need to save up marbles to get the other tabula and runes so that I can try to level up my crafting skills… I just wish getting marbles was easier since I had mistakenly thought you could re-enter your maze as many times as you wanted in the day and not just once for 30 minutes a day. Kind of lame, but I guess I can see why S-E did it (which is still lame). 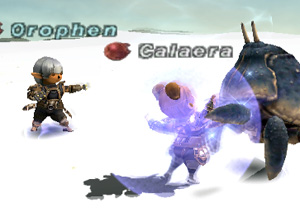 Now, last weekend we were SUPPOSED to help Makai level his BLM to continue to CoP. Things happened and that never happened. It was slightly frustrating since my brother was actually willing to go along and wasn’t asleep and got out of shopping with my sister. I have actually had the itch to level in FFXI but I haven’t really had the drive to level any job and was going to bring BRD to the party. This kind of changed when I decided to dust off DNC and try leveling it up again with Orophen.

Before, I really hated the job and resented it when people were saying the job was too overpowered. I remember getting my butt handed to me quite easily getting to level 13 and wanted to gouge my eyes out before ever wanting to get higher again. Then I started to level again and after getting Curing Waltz, I can see why it is a killer in solo leveling! Orophen had pulled an IT crab while trying to complete a FoV and I was sure we were going to die. It took some time to whittle down, but we managed to get it down without too much trouble! We even had a Goblin link with a Mighty Rarab in Bubumuri and that didn’t go bad either. Though I HONESTLY could have done without Orophen’s Shining Finger WSes. -_-; Times like that I really detest Boost and Combo even though it saved our life a few times…

Which makes taking a vacation into WoW even more enjoyable. I don’t have to deal with weird WSes from my dorky boyfriend and I get to play in peace and solitude! Though it gets too quiet easily, its a bit nice since this is my vacation time and I have been craving the occasional moment of silence. I’ve so far leveled my Shaman to 23, and finally turned myself into a mangy mutt! Ghost Wolf is a GOD send to someone like me who can’t stand walking around at such an awfully slow pace all the time. If it weren’t for Ghost Wolf form, I think I would have quit quickly since walking the whole length of Dark Shore a few times tends to drive me batty. 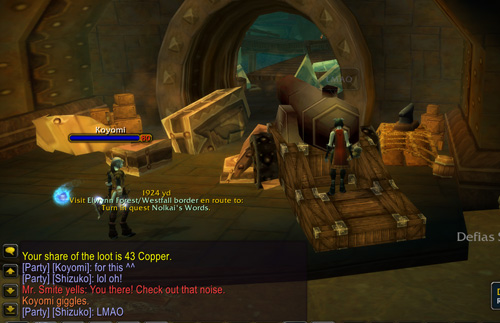 Koyomi (Mekare from FFXI) has also graciously helped me out in WoW and ran me through DM to get some loot, gear, and money and even some really awesome bags! It has made leveling all the more easier thanks to her help! Because my 8 slot bags were really starting to grow on my nerves and (again) force me to run away screaming bloody murder.

After I have made my return to WoW, however, I’ve noticed that my server has been awfully FULL as of late. Once I was stuck waiting for four minutes to just get in and I remember waiting for awhile and then getting booted out because of time out issues. I heard that when Blizzard was offering free server migrations, Misha (my server) was on the top of the list. The move has made it so that at one point I couldn’t kill a certain NM for a quest, because there was literally a crowd of people trying to kill it as well. Something I wasn’t used to seeing before, since I would rarely run into that kind of problem when I leveled my other characters.

On the other hand, it has made it easier for me to handle links since I really don’t have to worry about handling them in the first place! ;D

2 thoughts on “Marbles that dance in the moonlight of a pirate ship!”