Bringing you screenshots and other juicy little stuff!

For the past two days, Reiokyu, Mekare, Orophen, and I have started to pick away at the Avatar Prime fights. For three of us, it is our first time doing this and was a lot of fun. No stress, no worries, and lots of fun to be had with the four of us. Its like BFFs but minus the Paris Hilton drama!

I had remembered a long time ago, Russta had wrote an entry detailing the appearance of some strange Tarutaru who is always in the background watching you. I thought it was a fluke but when I saw him after our second Prime fight? Yeah. I couldn’t help but freak out. To be in a vast space of near emptiness and have some weird, unnamed Tarutaru look over you is just darn creepy! Yet for some reason, only Mekare and I caught it. Makes me think that Tarutaru is a pervert of some sort…

Before all of this fun, Mekare and Reiokyu had been camping Drachlox with Orophen so that the poor guy can be somewhat ungimp and get himself caught up with the rest of us. I just cannot help but poke at the poor guy when he isn’t 75 yet, and Reiokyu is. No offense to Reiokyu, but for a long time we never thought he’d get that far. Now that he is, its a lot more fun bringing him along now that he can really help tear things up alongside Mekare. Keke. Best part of all? I had just gotten home from a haircut and some shopping, and made it back in time to help them get this:

Now for the moment you have been waiting for! The chat logs pulling one over Reiokyu and Hiroshiko:

The first one is with Reiokyu and me as Orophen. I ended up having to call the guy to make sure that I hadn’t upset him too much because it looked as though he had logged out in haste! It was all good though, and I heard him laughing in the background because I was totally spazzing out: 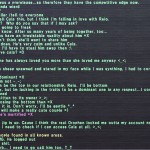 Hiroshiko was even better! Reiokyu and Mekare both knew what was up, but didn’t even bother to say a thing to the guy. Poor Hiro indeed! 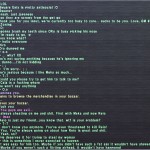 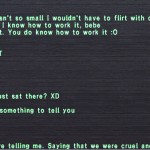