We’re back! After months of hiatus, we decided to dust off the ol’ BLU and head out to Yuhtunga and Yhoator Jungles for some poking, prodings, and other fun stuff. This time around Orophen picked out the camp, and I mainly followed around. This was strictly for personal reasons that will not be discussed on the blog, but it was definitely a nice change of pace. Our obvious targets were Mandragora and Goblins, and started off in Yuhtunga Jungle as a means to test the water. Food ranged from Meat Mithkabob to Sole Sushi and even Coeurl Subs when Orophen ran out of Sushi to consume. You’ll notice on the above picture that some of us are wearing RSE pieces as we found that some pieces were nice to wear and we wanted to experiment with different sets.

Anyway, after poking at the Mandragora in Yuhtunga Jungle, Orophen felt we were O-K to handle the VT and IT mobs in Yhoator and hopped onto a Chocobo to a camp away from the RMTers mucking about near the sides of the entrance. I admit to being hesitant at first and doubtful we would even be able to take two in a chain without really struggling. Turns out it wasn’t so hard to make it up to Chain 4 after awhile, and we were even able to handle an IT Goblin with relative ease.

Spells are a constant headache, however, and almost every time I want to get spells either something comes up or I find myself to be the only one really enthusiastic about getting the spells. I know the act is mundane and boring, but the reward is enough to keep me going at times. Even if I want to bang my head on the desk at times… Good thing there are shots like this that make it fun to try and get these spells at times: 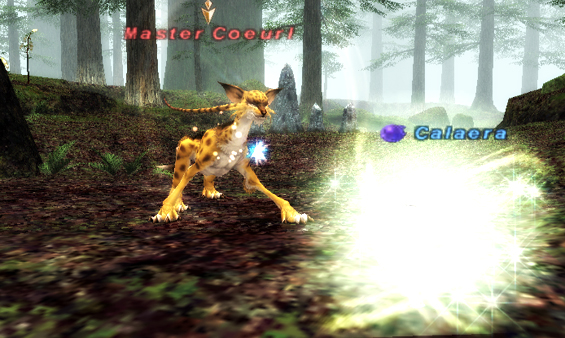 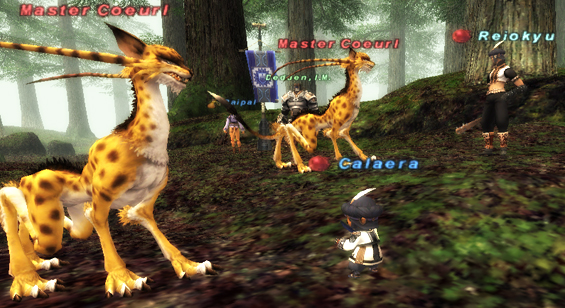 If there is one thing I have found frustrating, is how few people I’ve seen leveling in the lower level areas. Now, to an extent this is a good thing. Its less crowded and certainly not as much grief as there used to be by over camping. But then you see the people being power leveled and the RMT camps, and its just kind of annoying and sad. I kind of miss when the camps were overcrowded and people pulled death trains to the zone. Yeah, it was annoying and dreadful then, but sometimes nostalgia can get to you and then you start wishing for stupid things that probably aren’t as great as your memory remembers them.

Going off topic, if you haven’t purchased Phoenix Wright: Ace Attorney and own a Nintendo DS; now is the time to purchase the game. The game has recently been restocked in larger quantities across the US and for the wonderful price of $19.99. Best to purchase the game now before the third installment of the game comes out later this year! Also, for those who want a higher quality alternative to YouTube, check out https://www.veoh.com. I highly recommend watching Darker than Black if you are an anime fan, and watching it on veoh since the quality on there is remarkably better than watching it on YouTube.