A some what quick update since it is currently 1:17 A.M. and I have to get up early to get ready for work. Yikes! At any rate, as you can tell from the images we have been leveling in Eastern Altepa Desert. Its been a really hard place when starting out, since the primary mob until 34 or 35 (to be on the safer side) will be the beetles. If we had spells that were stronger against them, they weren’t close to other mobs, and we didn’t have to worry about a floating Earth Elemental, I think things would have gone smoother.

Our food has primarily switched from meat dishes to Sole Sushi. I have tried using Meat Mithkabobs on occassion, but I’m not really sure what is working or not. I also stopped caring at one point, but one cannot blame me when I end up partying soon after I get home from a long day of commuting and working. My muscles have been sore as of late, and sleep has been lacking at times…

We will most likely continue to level at Eastern Altepa Desert for another level or two, and then struggle to find ourselves a new camp. Most likely we’re going to push getting our BLU to 40 so as to take it for a six man run into the Aqueducts for CoP 2-3. Oh, and Dhalmels? Are a piece of cake with Bludgeon, Head Butt, and Smite of Rage. Its absoloutely divine seeing them fall at your feet after a few whacks here and there. I just wish I understood why I end up getting so much damn hate as of today. I wonder if its because of that added +3 Accuracy ring I swapped into my gear set today… oops?

Also, despite our picking on Reiokyu, we do love Elvaan. No, really, we do! 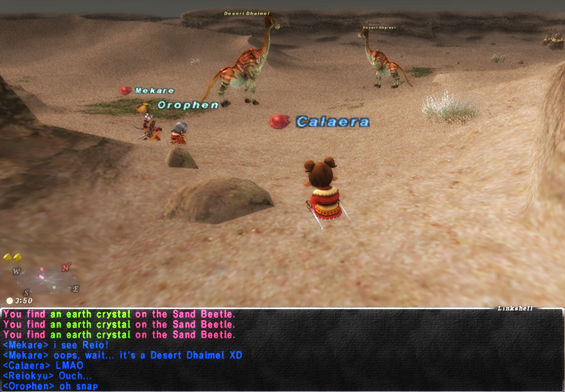