After a day of poking at Lumber Jack for Mekare, getting BLU spells for myself, and then taking a break, we pushed on ahead to do a BCNM in an attempt to get Utsusemi: Ni for Reiokyu. We chose Die by the Sword because Mekare had found out it was possible to do it with three BLU and we always like doing things with three BLU. With that in mind, we geared up, brought Reiokyu with us, and trekked on ahead to Fei Yin.

Items we brought with us:

If you know anything about the BCNM you’ll know that the weapons are only prone to certain attacks depending on the weapon type that is above their head. The three weapons are: club, sword, and polearm. Our spells for each weapon were something along the lines of:

We all used /NIN and pretty much broke the record the first time around and then the second time around broke our own record! 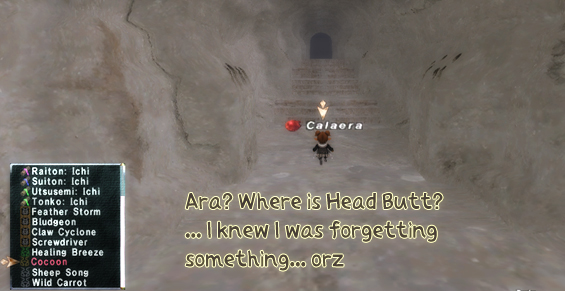 Still… despite me going without Head Butt all three times (was too lazy), we won each time without too much difficulty. We even pulled away with what we intended to get on our first run:

Now all Reiokyu has to do is level NIN *and* BLU, and love me for as long as he lives. ^-^b