We decided to do this run since we had already completed 2-3, and managed to get everyone together 30 minutes before our required meeting time. Sweet!

Mekare, Orophen, and I had actually gone into the BCNM beforehand to try it out and see what our damage would be like solo-wise. I believe I was able to get the farthest out of all three, but then died when I found myself being poked to death in succession. Our setup was the same as CoP 2-3: BLM, BLUx3, NIN, and WHM. The strategy we had in mind was to have Reiokyu (the NIN) to go in and kite the Mammets while Hiroshiko (the WHM) healed him. The rest of us were at the entrance of the tunnel with a singular Mammet and beating up on him while Reiokyu kited. Makai was our healer and managed to keep us alive until Orophen bit the dust after being unable to pull hate off of him. 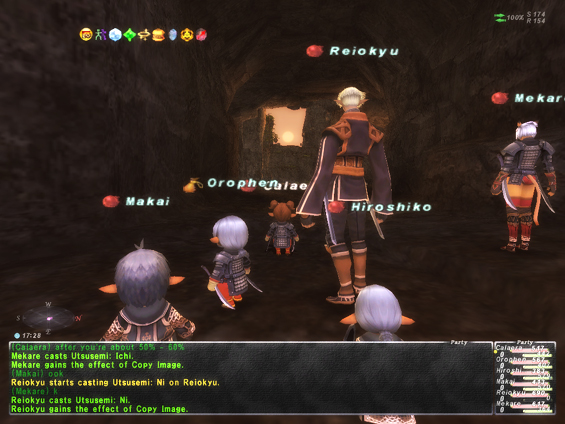 Our spell lists was to incorporate a mixture of both Physical and Magical attributes so that we could handle certain situations as the need arose. Reiokyu chewed on a Jack O Lantern, the BLM and WHM inhaled Pies for MP, and the BLU dined on Sole Sushi to help with Accuracy. We were unable to break the record of 12 minutes and some odd seconds, but we were able to finish the mission! Which is what really counts, right?

Reiokyu will, hopefully, continue to level up NIN but at a leisurely pace. I’m a tad worried if we will be able to continue like this, as I found that partying with my friends was a more enjoyable experience than finding random strangers who could either give you a headache or people who can turn on you and be a jackass. I have BRD to fall back on, but it still a trip doing it with a job I never thought I would come to love as I have. Oh well, time will tell, I suppose.

4 thoughts on “A walk in the clouds, with rain stained red”