Now that the collector’s edition for Final Fantasy XIV has been out for a few days, I feel like I have gotten the initial rush out of my system and can safely blog about it without feeling hyper anxious about staying on the game for hours on end. Well, and it helps that my wrists are a tad sore and I am in dire need of doing other things at the moment. That said, I am incredibly excited for what is to come with this game in the coming months and beyond. 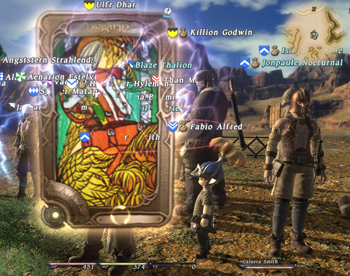 First of all, I was utterly floored when my best friend decided to take a break from the land of Azeroth and come check out the world of Hydaelyn. I have been keeping my WoW account active every so often so I can go on and chat with her when I can, but its been hard since I was not really into WoW. It was a great time waster, but nothing I could feel really invested or immersed in. That’s what I have been missing terribly since I’ve pulled away from Vana’diel; the whole immersion experience of feeling like you are in a living, breathing world instead of having to feel the intense pressure of going from one quest to another without wait. I don’t know how she feels about XIV so far; I know its buggy, I know it has its flaws, and I know it lags as hell on the Lindblum server. I do hope she is enjoying herself, but I am also keeping my WoW account active in case she doesn’t. I told her I’m ok with her leaving XIV; which is true. I would rather her be happier elsewhere than frustrated playing XIV.

Second, 8 hours leveling!? Who would have thought! I am usually not one to enjoy sitting down for long periods of time, but I found myself doing so the other night to team up with people from Save Point doing leves and behests. It was kind of insane, a lot of fun, and also really exhausting as it started to get to 2 a.m. and Naked Moles were hunting us down and knocking us down dead. Then I started to fall out of my chair, and well… lets just say I needed a serious break after that because it was the first time in a very long time I had sat down and just gamed so seriously. Will it happen again? Who knows. Maybe. Maybe not. I did have a lot of fun, and am looking forward to getting a chance to play with the people I’ve met from FFXIVblog and Save Point.

By the way, I seriously think either I’m very well liked or I am the sore butt of jokes with some of the guys on the LS. You guys know who you are!

Anyway, the only problem I have, really, is with the complainers. I guess its because after following this game so intently, working on FFXIVblog, doing the Orzcast, playing the beta, and what have you… it feels like XIV is in a way my child. Now this is a problem; when a parent really loves their child, it is easy to get annoyed and get into downright denial when someone says there is something wrong with your child. You come up with excuses, you defend remarks made against your child, and sometimes you just want to strangle the other person and tell them they are wrong. I’ve had to catch myself a few times, because it is SO easy to feel frustrated with some people when the things they are complaining about has already been mentioned to be future fixes. Then I have to remember… not everyone has been following the game as intensely as others and there is a disconnect of information and what not.

Eorzea has its rough sides right now. Its new, its shiny, and those who have been playing the other games right now tend to forget where their beloved games originally started out; which wasn’t always at a pretty place. 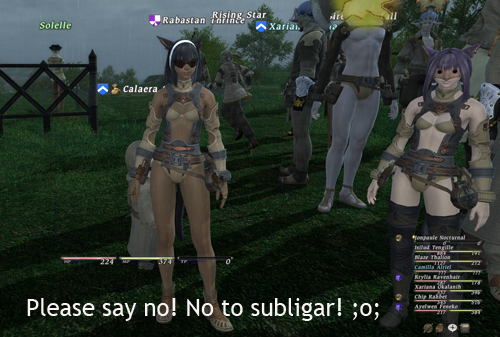 I do hope people give it a chance, and that people who are like me and getting impatient with the complainers remember that some of us are coming from different perspectives and might have a harder time seeing what a beautiful gem we see before our eyes. XIV is new and has the potential to build a great community like XI, and definitely better than the mess that is known on WoW forums and chat channels. I’m definitely looking forward to seeing more of what is to be offered us, and to be able to enjoy the journey with new and old friends alike for some time to come.