I’m back! Kind of sort of. Because my wrist and fingers still hurt, I have tried to find a work around over having to type so much with my fingers on the game. The solution? Making good use of /follow and using MSN Messenger Voice Chat and Skype to talk with my friends. We’re trying to get Team Speak or Vent up, but I’m not sure that is going so well.

One of the first things I did when I came back was to wander around Sea Serpent Grotto with Mekare, Reiokyu, Orophen, and Enkidou. We were hunting items needed for O.hat for myself. It was a fun little walk out there, until the guys started to gang up on me and Mekare and we were forced to retreat to KRT by ourselves. From there we decided to commit suicide together after telling Orophen I would fight Vrtra if I rolled anything higher than a 500. I rolled a 577. 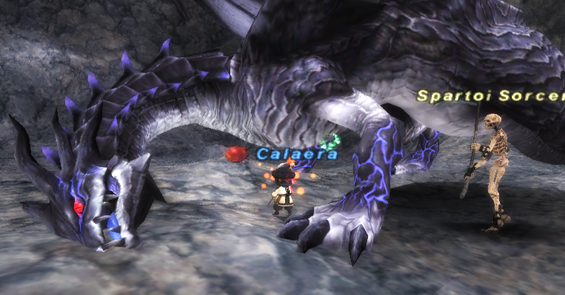 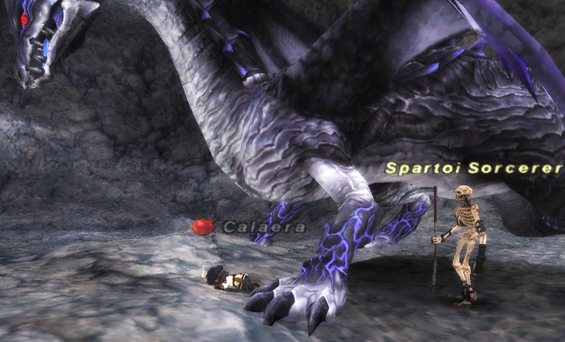 I went kaboom! At least I wasn’t alone and got to die with Mekare at my side. ^-^v

The next day we decided to finally try out ENMs since we couldn’t think of what else to do and Reiokyu needed to go fatten up at a BBQ. We geared up and all dove back into the darkness that is the Emptiness.

Our first target was Promyvion-Mea and the ENM Playing Host. During our trek up the area, we noticed that navigating the zone was MUCH easier than it was in times past. The update to the zone has really simplified the area and made it so that you aren’t waiting for long for hordes of mobs to pass or worrying over the possibility of linking a group of mobs. Of course, you’d be pretty noob to do that in the first place, but because we had already gone up there a few times and were working on a time limit – the change was very much welcome and made everything go all the more smoothly.

Our set up was the same as our previous CoP setups: BLUx3, WAR, BLM, and WHM. It was a relatively easy battle despite the fact we didn’t beat the record. Which is fine by us, because at least we got some crazy EXP for a little amount of work!

With 30 – 45 minutes to go after that run, we decided to also do the ENM You Are What You Eat. And managed to break the record on this one by 10 seconds.

Along the way, I finally got to witness first hand how damn broken the update had made 2Handers. Seeing Reiokyu deal out a 600+ WS on an enemy was a real WTF moment for me. I hadn’t really gotten to see any of that stuff because of my wrist, and had only heard about it through discussions via my communities and other blogs. But witnessing a level 30 WAR deal out that kind of damage? Yeah. I couldn’t help but feel that this update has kind of fucked things up a bit. Sure, it has made Great Axe wielding WARs sexy again, but now they almost seem a little too good. Plus it means Orophen will level up WAR instead of finishing up on his now lolRNG. ;o;