Up until now, our party has consisted of mainly three BLU. However, as my wrist and finger has given me a lot of pain as of late, I haven’t really been able to play as often, as long, or in the way I want to. I need to take breaks often and for long periods of time. It really sucks as I wish to play with my friends and play the game alongside them. But my friends are a pretty understanding bunch and try to work with me and my limitations. One way they do so is make sure I am constantly on /follow with one of them, talking to me on Skype or MSN voice chat, and generally being flexible when I need to take a break or go away. They don’t put up a hissy fit when I start to show signs of weariness. Instead they encourage I go, because I tend to be terribly stubborn about staying for as long as I can. Pain or no pain.

For this reason, that is very beneficial to us all, we BLU have mostly been leveling up via ENMs and missions. Some people might look at this in disdain, but for now it works for us all. I can still level up, play, and be with my friends and log off after an hour and a half when my wrist feels as though it has been pushed to its limit.

That said, for those who are sick and tired of the RNG and SMN only setups, try the ENMs with a party set up that pleases you. We knew our set up of 3 BLU and a WHM, BLM, and WAR would work because we’ve done it before. The ENMs are easy and allow for people to claim an easy 3,000 EXP in a short amount of time (most of our battles don’t even last three minutes). Yes, it takes awhile to get up the Spire, but its a relatively easy going pace for us versus doing a normal party session. But the ENMs are pretty much a precursor to what lies ahead for the mission itself. Its weaker, yes, but you still get an idea of what to do and what not to do.

By November, I’m hoping that things will get better when I am finally admitted into Physical Therapy. Its a long wait from now, but I’m keeping my hopes up! In the mean time, enjoy a picture of me being a part of Meow Mix for this little kitty: 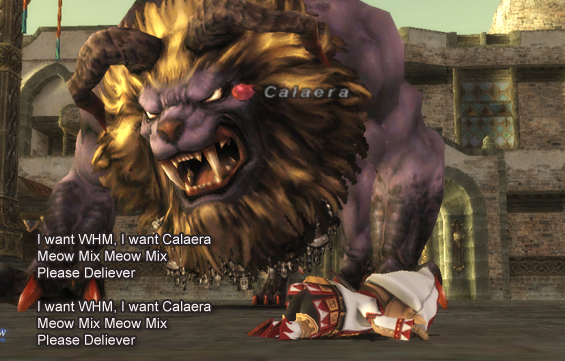