Yeah, I quoted Britney Spears. Yeah, I’m out of mind. But what do you expect? I’ve been playing WoW’s Blood Elf as of late, and they are certifiably on crack. How do I know? Just watch us dance! 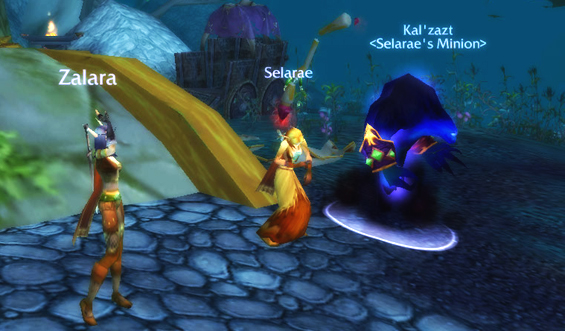 So, yeah. Mekare, Orophen, and I have had no inkling to really head back to FFXI as of late. Its not that we hate FFXI (although we do have our gripes with the game). We just haven’t had a reason to go on there. On WoW we’re trying to do quests up the wazzo, learning how to do our jobs, etc. I feel like there is so much to learn, and yet I can’t even learn it all since I don’t have all the spells that would add more to my job. At level 17, I’m just barely making a dent into the game… let alone the Paladin class. I had wanted to play as a Priest (WHM), but I wanted to try something new and different. So far I have two characters: one is a Paladin and the other a Rogue (THF/NIN kinda). I really like both jobs, and I’m absolutely in love with the Blood Elves. They are oh so pretty (I’ll probably drive Mekare and Orophen mad with my pretty comments/jokes)! 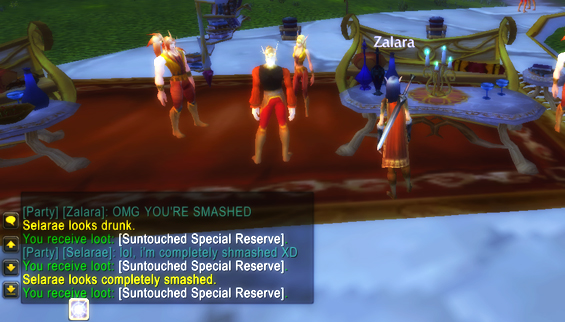 One of the coolest things we have found out about WoW is that we can get drunk. I don’t drink in real life, but watching my character drink in the game? Hilarious! Especially when they veer off too far in one direction over the other or what have you. Though its kind of scary when you fall into the water, and… yeah. Don’t try it!

As for WotG, I’m going to wait a bit before actually getting it. I want to see how people are reacting to it, if its really worth the money, and most importantly: if Mekare and Orophen will have the inkling to get it. Nothing against my good friends on Ragnarok, but Mekare and Orophen are my best friends and they are always there for me in the game. I’ll follow them wherever they go, and without them I’d be wondering when the hell Hiro will actually log on to do stuff or if Reio will talk about piss poor damage and then force me to spend all my MP healing him. :P I don’t get none of that on my beloved Mekare or my stinky ol’ boyfriend… kind of.

For my U.S. readers, Happy (early) Thanksgiving! ^-^ I’m looking forward to an extended weekend to do a lot more sleeping and a lot less stressing out. I’ll post what I’m thankful later on, when I have something ready to show the whole world how mushy I can be. D’awww. :3