Awhile ago, I said I would post shots comparing the Vaio CR and the Vaio SZ. There aren’t many shots, but it was nagging me for awhile so I went ahead and took the pictures before I started studying. Before I go into that, I thought I’d talk more about the laptop since I’ve had it for awhile now.

Overall, it is SO much better than the Inspiron 1520 I had. I thought I would be ok with such a large laptop, but I found that it wasn’t really for me. My commute is long (can total about up to 4 hours round trip) and I also study best outside of my room. I end up playing video games if I am in my room, whereas outside? I feel guilty and forced to study! I also like being around the noise, as it tends to help me concentrate more than a totally silent room. Of course, all of this is hard to do when I’m lugging around 6lbs on a laptop alone. When I commute, I bring books, notebooks, my purse, and sometimes I even bring along a blanket (ride the longer ferry to Seattle during the commuter rush, and you’ll see a lot of people doing this and more). So the SZ really slims back the extra weight that can be put to other things like… more books!

The SZ is also great because of the dual graphics card. There is a dedicated and an integrated that is used as “Stamina” and “Speed” mode. Stamina mode is great for when you’re doing just word processing or internet browsing, and speed mode is great for when you watch movies or play video games. With “Stamina” mode, I can clock up to four – five hours depending on my settings. That helps a LOT as it cuts the need for me to carry around the power adapter! I can also sit in front of the TV and just watch stuff, if I wanted to.

The downsides to the SZ, however, primarily come with the keyboard, the OS, and the dedicated graphics card. How?

The Keyboard:
It is sometimes uncomfortable to type on. I am able to type well on it, but it still feels weird at times. I still wish it had the TZ and CR keyboard, because those are much more attractive and easy to type on.

The OS:
Vista sucks. Period. I should have ordered XP, but P1 is great because they are sending me a free XP disc to install onto my laptop. If you are ever looking to buy a laptop? I HIGHLY recommend P1!

The Graphics Card:
WoW and FFXI are installed on this computer. WoW runs beautifully here, but FFXI chokes like someone forgot to chew their food and just inhaled it… If I had time, I’d find a way to get it to work… but I don’t, so I’ll just wait it out awhile.

Overall, this laptop is a dream! I love how small and light it is, especially since the CR is so damn heavy! For a 14in, I believe it weighs a whooping 5lbs or so! I was so used to carrying a light laptop, that when I lifted the CR I was so shocked to find it weighed quite a bit! Its like lifting a feather and a rock! Crazy difference! There is also, of course, a difference in appearance. While I like the glossy look, it tends to pick up finger prints easily. The CR is a consumer notebook and the SZ is made for style someone probably in the corporate world. While I may not be part of the later, I still like the look of the casing vs. laptops with glossy coatings. It also works, since I don’t have to stress out over how to remove the finger print marks after a period of time… 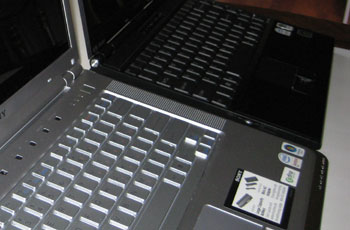 Before buying the Vaio SZ, I really worried about the keyboard. The keyboards on both laptops aren’t like other keyboards, at least for a Windows based system (the CR mimics the look of a Mac in terms of keyboard). I spent a lot of time playing with the keyboards on display models at various stores, and had to really think about if I was going to be ok typing on the SZ. The keys are noisier than its relative, but the CR also has a problem with really hard touch pad buttons. I found I have to press quite hard in order to use the buttons! Also if you are used to touch typing, then you might find it hard to type on the SZ. I have to hit the keys a little bit more in order for the keys to recognize my strokes, but I managed to adjust my typing in order to get the maximum benefit of the keyboard without tiring myself out.

Here are close ups of both the keyboards: 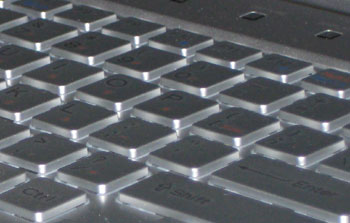 The keyboard of the CR. 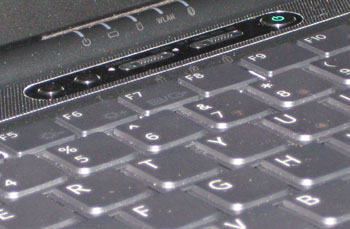 The keyboard of the SZ.

What makes the SZ special, is that premium editions come with a special kind of display: LED backlight. Found in new Macbook Pro versions, this type of display allows for whites to be whiter and for the screen to be almost razor thin. If you’re looking at normal SZ laptops, you will not find this type of screen on there! Is it worth getting? That depends if you want shed as much weight as possible, are particular about screens, and if you have the money to dish out. There is a problem consumers must be aware of, but is not necessarily in ALL models that have LED backlight. In some display models of the SZ and MBR (Macbook Pro), there are yellow vertical bands that can range from being slightly there and from being horridly apparent. There is also a horror story of a guy who kept buying several SZs and found nothing but yellow bands on all of his laptops! Even after opening them IN the store! Needless to say, it had me worried until I ordered from P1.

P1 (a.k.a. PortableOne) should be a role model for all laptop/computer companies in terms of service and customer satisfaction. I have been more at ease with them than I have been with Dell, and I can rest easy knowing I don’t have to deal with the snobbery that is supposedly rampant at official Sony customer service centers. I’m not too sure about the later, but great customer service is what I like and I wasn’t going to take chances going having my laptop serviced by Sony itself. Going with P1 also allowed me to get a 160 GB 7200 RPM HD that is NOT available elsewhere. My father’s CR has about 200 GB but runs at 4200 RPM. He bough his at the either the PX or the FX (military stores), and so if there is ever a problem he will have to call Sony Service Center. If I ever have questions or need something? I e-mail P1 or call them up. They may not have 24 hour service, but I can be sure that my problem will be taken care of and that I can talk to the same person time and time again (you will not believe how many customer service #s I had with Dell by being juggled by them).

Also something of note: the CR has an integrated card. I believe its the Intel Graphics Media Accelerator X3100. I don’t think it will run WoW, but it should run FFXI if you are interested in having it on your system. Something I also had to take into consideration when buying my laptop! Overall, I’m a completely happy person with my new laptop and I often have heads turning on ferries, too, asking what kind of laptop I have. Though, if someone out there happens to be reading this and considering a laptop: think if you should buy now or wait for the product line to be upgraded early this year. There are rumors of the SZ7 coming out (I own a premium SZ6), but I can’t wait that long since work and school won’t wait that long for me…