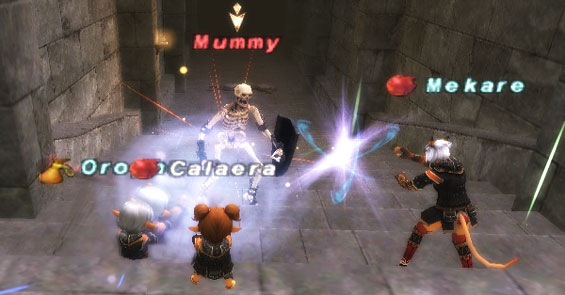 After a three month hiatus, the BLU set has returned! We were actually shooting for starting up again late December, but had little luck since we were playing WoW and then I had health problems (flu, hand and wrist pain). For these levels, we took a return trip to the Eldieme Necropolis; a small trip we had made for the first half of level 46 but had to leave because I had lost RR and we couldn’t get a Raise.

To get to our camp, we had to go through Beaucedine Glacier and then to where most people used to camp for the genkai item. Its a tad annoying, but its a nice secluded area and we hardly have to worry about anyone pestering us. The most annoying mob we fought here are the Hell Hounds. Being hit with a virus really puts us down for awhile, considering we have no one who can cast Viruna on us and the alternative ways of removing that status effect is a tad too pricey for us. To get around this, we eventually started to zone the dogs so that they would depop. This started to work against us after awhile, when the dogs started to pop at a faster repop time. Damn.

Lichs are especially annoying because of their spell casting abilities, but Mummies are great! They aren’t as troublesome and really bring about some nice EXP. We didn’t get many high chains, but after a few good hours we managed to ding up to level 48. We plan to exp for at least an hour sometime this week, and then try to get our CoP set to do a few ENM runs (that means you, Hiro!).

Though I really need to be careful about how much hate I pull. There was one situation when I ended up going damage happy for one fight. I started off with Bludgeon, went wild, and then tossed in a solo renkei for about 569 damage. o.o; Being a BRD and WHM, I’m not really used to doing stuff like that on my own! I couldn’t help but laugh and remember why I’d be the worst BLM alive… I’d end up over nuking things to death because I’d look at the numbers and go “ooooohhhh~”!

During this exp session, I found that FFXI was much easier on my wrists than WoW is when trying to grind away. I think for that reason, I’ll put renewing my WoW account on hold for awhile. My wrist has been acting up lately, and it tends to be bothersome. I have kind of figured out how to go at FFXI so that I’m not hindered too much, but there are times when I still end up in a lot of pain. I don’t like it when I have to be out for a few days because I was WoWing and then try to go onto FFXI but find that I can’t because my wrist is in a messed up state. It also prevents me from doing homework and responding to e-mails, so… yeah. Sorry, WoW! You lost this round.