Taking a break away from CoP, we’ve decided to focus solely upon BLU until we reach 60. That means there will be days of spell gathering, ENMs, and anything that will help the BLU set meet its goal ASAP and help proceed with CoP. We’re also nudging at Hiroshiko to consider leveling BRD, but knowing how busy he is I’m not expecting it to happen anytime soon. Though seeing how my he and my brother tend to play and level, I’m heavily considering taking them into the set once in awhile so that they can get a bit of EXP and we can keep chugging along. 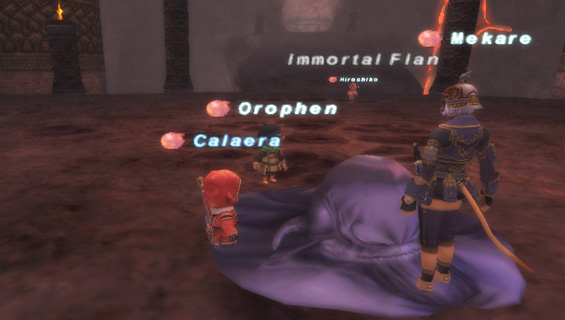 On Saturday, one of the first things we decided to do was get our BLU shoes done. We had died last time on the way there, but managed to successfully get past without any aggro by those nasty, ugly moths. Poked at a few puddings (ew) and then fought two in the BCNM once we reached the Execution Chamber. It was damn creepy in there, yet I couldn’t help but think of ways to poke fun at Hiroshiko and maybe Orophen about sending them off to be executed by me. I don’t think I said anything though, because I did enough poking at Hiroshiko long before. We managed to get our shoes that day, and then picked up Reiokyu at Whitegate to help us get Self-Destruct for Mekare in Gusgen Mines. Although it took a LOT of work trying to get that spell for her, I’m grateful we were finally able to get it and actually move onto the other spells we need to get. Which will probably prove harder to get, simply because of the lack of mobs available to us due to people farming them… /sigh

After Hiroshiko and Reiokyu left for the day, we decided to head towards Quicksand Caves after a three hour break to get some leveling done. Our primary target were the Helm Beetles, but we occasionally pulled an Antican after having a party come in and take a few of the beetles we were camping. Thankfully it was just one party, and that we were killing slow compared to them. It was pretty difficult to fight the Anticans at times, simply because Chaotic Eye not being as great as a RDM’s Silence and the Antican’s need to bombard us with tier II, III, and then AM magic. Meh. We didn’t get very far due to some problems, but we were within 3k of 52 and decided to get the rest during ENMs the next day. I’ve also finally swapped out Bludgeon for another spell. I hadn’t done it for awhile, because I was sort of toying with how to best play my BLU in our set. I feel like I don’t cast nearly as often as the others, and yet I often find myself with a ton of hate that can’t be easily pulled off of me at times. Which I kind of find funny, since I’m so damn short and because I don’t play DD classes at all. I tend to want to manage my MP more conservatively, yet make sure our HP is always nice and healthy since shit can happen so fast that it hurts. I think I’ll probably be taking another look at how I’m playing BLU and find ways to better myself since the spell and equipment choices are definitely widening now that there is more out there for me. 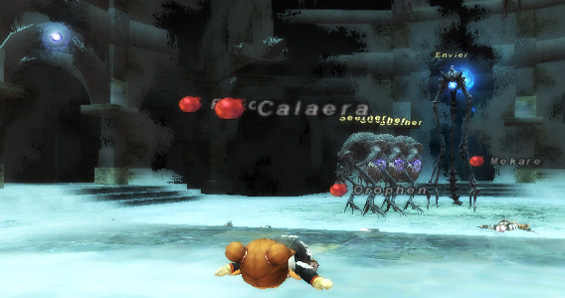 For ENMs this week, I decided to go without my brother. Hiroshiko needed to get things done, and I was feeling impatient… so I said we would go without him and off we went! While there, we couldn’t help but laugh our heads off at the people who went there with groups as large as 11 to break the record. After seeing it for Dem and Holla respectively, we were astonished to find a simply party of 6 managed to break the ENM record at Mea. Go figure! Mea was the only area we had trouble in, and when I actually regretted having gone without my brother. Because the mob starts to create babies out of thin air (where DO they come from!?), we were hardly enough to take down the boss and the three babies it managed to spawn on top of us. All in all, it wasn’t too bad since we were able to walk away with 6k and ding 52 on BLU! 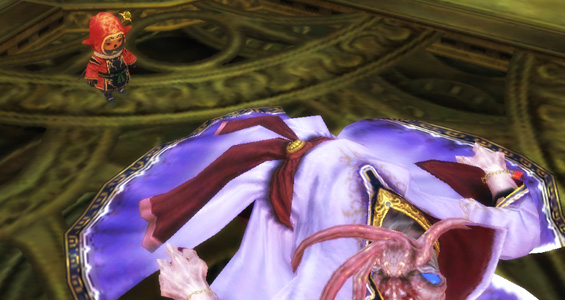 After yet another break, I came back and talked to Mekare about doing more ENMs and then trying out Transformations. I have been dreading this fight since I became BLU, because I had spoiled myself rotten and watched a YouTube video documenting the whole BLU quest series. Despite it being a mere set of pixels and data, it still sickened and depressed me watching it and knowing what some BLU end up to be storywise. ;o; I’m sure one day I could make it into a great fan fic, but that is if I could ever get myself to write in that fashion anytime in the near future…