Okay, spoiler screenshots and details are behind the cut. Want to read more? Well, you know what to do… 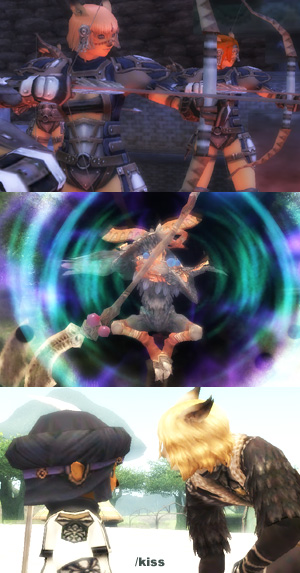 Every dramatic fight ends with a kiss!

If I could sum up what going through the latest quests are like, it would have to be: “Wow.” I know a lot of people shit on WotG, and I know not a LOT of stuff was implemented… but the things that were implemented really blew my mind away. Anyone who has been talking to my personally knows that I have had a growing bitterness at being a support class in Campaign and non-exp party situations. I know, its my fault for loving support class jobs, but many cut scenes and missions put this heavy duty emphasis on kicking ass and taking names. They don’t say it explicitly, but it is implied when lo and behold you hardly ever see many support job characters in the fray. So it was to my delighted surprise that a slight mention was made of Tarutaru and support in the latest Windurst Crystal War Quest. Ok, sure, the script was kind of cheesy, but it actually made me excited to see such an exchange going on. Though just for the record? I don’t ever plan to get in Robel-Akbel’s way. Ever. His actions still has me shuddering in fear over his ruthlessness.

Needless to say, I was a little less bitter about wandering around Campaign battles as a WHM and BRD as I had been in the past. It also helped, I suppose, that Campaign was adjusted and the need for more cooperation to succeed has risen. It took me a few days to accept this, however, but it made Campaign a lot more fun in the end. Jugner especially is a hot spot and is as intense as Besieged was before the addition of all those medicines. Seeing a mass of dead is crazy and almost overwhelming, but it was cool getting a wave or bow from people after a battle because of the consistent Raises I tossed out to people. Even more great that a PLD I had been Raising and Curing managed to pull off Shadownhorn off of me after he chased me around the fortress a few times (which, by the way, was NOT fun). Ah, how I love team work!

So you’re probably wondering, “Well, what did you do this weekend Cala?” Pretty much Campaigns to get my WHM to 60, get back EXP lost from culling Yagudo in “A Manifest Problem”, and try to ease some tension that seemed to be building up. I don’t know, it just seemed so relaxing to finally kick back and have fun on Sunday, and I was really elated to just have fun without worry. Next week, we plan to play as DNC for awhile. I guess we’re taking a longer break than planned, but I honestly don’t mind. It feels great to just breathe and do other things that this game has to offer. Something I don’t often get to do during the weekday. Well, with the exception of last week when I went online to do things with Reiokyu. Who, despite my relentless pokings and such, has been a great support and friend to me lately. Which makes having to chase him down twice for a Raise II worthwhile. If it were Hiroshiko on the other hand… /dance 2 on Hiroshiko’s corpse!

9 thoughts on “The War Rages On”