I still remember the days I tried to get Promyvion-Holla done oh so long ago. I believe it took us three tries before we actually won the damn thing, and I often remember how sweet our victory was then. It was truly amazing given that we barely had any medicines, anima, and only had five people with us.

Unlike last week’s Promyvion-Mea run, I had not really planned this one out very well. In fact, it was done hastily due to the fact I merely wanted to get it done and over with. I hate Holla almost as much as I hate camping NMs or smelling “fresh” fish.

We decided to go with the anima we had (not everyone had everything, as we did not farm for anima beforehand) and chugged our way through the hell that is Holla. Upon reaching the top, we decided to try a dry run to test the waters before diving in.

The dry run went even BETTER than last week’s Mea dry run, as we were able to get the boss as low as 17% HP before completely wiping. If the BLU had actually used Yagudo drinks, food, and ethers, we could have won it all on our own. 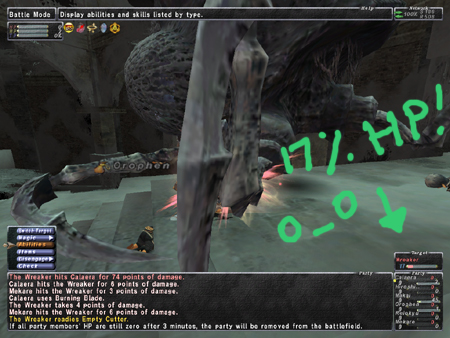 After being ejected out of the arena, we went over plans of anima usage and what not. Though we honestly could have just gone in and used Ethers just for the heck of it versus taking the time to put on dummy buffs and what not. It was so ridiculous we did not even miss Makai’s 2HR and relied on mostly melee 2HR to finish up the work that was already being neatly accomplished. As for the buttload of medicines, food, drinks, etc I brought? They merely ended up being re-muled for use on other missions or BCNMs. Next time: travel light! 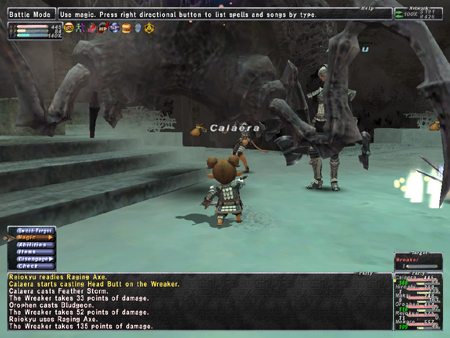 We had 0 deaths, barely used anything (except food and drinks), and managed to get this as our reward (well, besides Makai and Hiroshiko getting Lufaise Meadows access):

Now if only Reiokyu will stop feeling impending doom will fall upon us! GAAAAH! Now to get BLU to 40 and try to get the Minotaur fight done and over with. Ick.