February has been one hell of a month for me. In real life I ended up struck with a lot of health problems, but in FFXI I ended up having a lot of positive experiences with my friends and my new Dynamis shell. I’m starting to get into the groove of things, and am kinda feeling the love from the people I am starting to PT with regularly in Dynamis. The past few runs, however, haven’t been as kind to us as our first run in Jeuno in terms of AF drops. San d’Oria seemed particularly stingy, but at least I had fun getting myself killed over and over and over and over again. No, that’s not sarcasm either. I kept rolling over laughing with how many damn links we had until, well, we had a particularly nasty pull and Hiroshiko accused me of wanting that big of a link. WHICH I DID NOT, THANKYOUVERYMUCH. Sure, I wanted to be able to do more than Ballad, toss cures, and what have you… but that doesn’t mean I want to see wipes of epic proportions… <.<; At least now I can say I have finally obtained these titles!

We also did a quickie BLU set last weekend, which was a lot of fun. A very nice Elvaan RDM also decided to help us out while he was waiting for his friend to arrive so that they could take over the world! 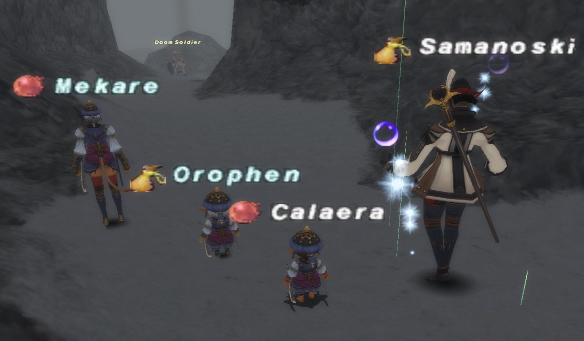 I wasn’t very keen about the camp spot, but it was at least nice being able to hit the occasional Chain 5. We were basically camped out in Gustav Tunnel fighting Bones and Robber Crabs on the second map. We had only one instance of blood aggro, but that was our fault since we had fought too close to the area we were pulling mobs from. Still, I kind of wish we had harder mobs to fight but it was still a nice place for us to all skill up and get our Sword and BLU Magic Skill up to speed from having done Campaign and Level Syncs for awhile. But now that we’re getting up to speed (close to 65), I’m steadily looking forward to getting new spells despite knowing that I am probably the only one who feels that way.

And finally… wanted to see if I could get any rewards with the Adveturer Recruitment Program I used to invite my brother with a long time ago and found I could get this! Yay!

Now to try and get my brother to pick out his last reward so I can get the Lunar Cap!

5 thoughts on “Libera Me From Hell”