Since completing my Montessori training last week (whew!), I have been busy in the game with odds and ends that I feel my head will spin off. The last time I played the game this much was… well, er… uh… I can’t really remember! And by “this much” I mean almost every day while being productive and not using FFXI as an over glorified chat program.

Anyway, first things first! Skill ups! I have miraculously capped my Healing and Divine magic skill on my level 61 WHM. I am hoping by having it capped now, I won’t have to bang my head on the desk as many times later on when I decide to pick it up again. I have also managed to skill up Fishing 2 levels over the weekend and bring my moat carp count to a measly 408/10,000. Not that I really care that much (sorta), since Fishing is an activity I enjoy participating in to mellow out. I have been having Fishing withdrawals since I’ve been grinding away though, so I am looking forward to getting back into it next week if I am not busy with other things.

I am kind of bummed out about being unable to skill up in Campaign without tags anymore, but I figured it was getting abused in a way S-E didn’t intend and had to be nixed. Still… it drives me bananas not having capped skills and I just have to hope for a Besieged to roll around whenever I am on so I can recap my BLM skills whenever I level.

Speaking of BLM, project BLM DUO has commenced this week! We started off at level 37 on Monday and dinged level 41 last night (or was it 42? I forget…). Our plan is to level BLM a few times a week for a few hours (2 – 3 hours), and hopefully get to 75 without too much trouble. BLU leveling is still on weekends or whenever, and WHM will be leveled after I finish BLM. I think I might be stretched out, but at least two of those jobs are already in their 60s and don’t have much more left to go. We won’t get to level next week since Orophen is attempting to finish up the doink! layout before my birthday, but I think that will give me time to focus on other things such as Fishing and finishing up my RDM subjob. 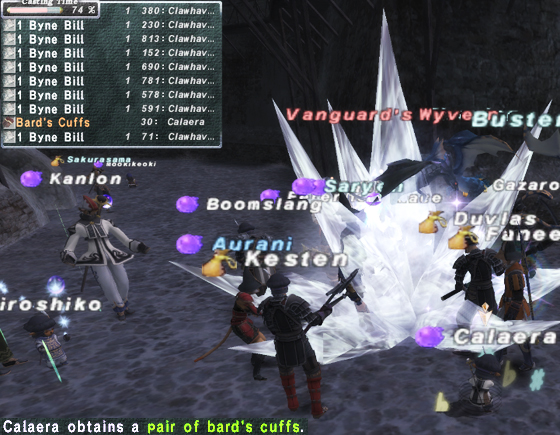 Last Dynamis-Bastok, I finally received my second piece of BRD relic! Woo hoo! I even had the pleasure of having my own cat (Sakurasama) during Dynamis! She is an awesome pet that nukes, hugs, and noms me when I bite her too. But Dynamis doesn’t like pets and ended up killing her a few times and forcing me to rescue my poor beaten up cat. D;

More than anything I am looking forward to hopefully getting CoP done next weekend and getting my Tamas Ring. I know Rajas would have been great for my BLU (and part of me still wants to get it), but I figure I can change it if I really want to and that I have more mage/support jobs than I do melee anyway. Though I know a certain someone is hoping I go towards DRK or SAM, stating its a better fit for my blood thirsty personality~