Yesterday was one heck of a crazy day, and not of in-game things! Most of the day was spent waiting (well, I napped), to see when people would free up because of real life on goings and one in game event that I hadn’t fully accounted for until the very last minute. Oops. Despite the ups and downs, I had a pretty fun day overall. I have been really into writing as of late; a hobby of mine I had put aside during my Montessori training. I am not that good, but I feel great pleasure knowing my friends enjoy it and get a good kick out of it. I even did a free write (writing non-stop and whatever came to mind) on Calaera and in a more story kind of setting. The only goal I had was to try to make it seem she wasn’t all THAT bad and cruel, and when I had posted the link on Twitter… I nearly choked with how many hits my new forum had received in such a short amount of time. Its nothing stellar to other people, but I really hadn’t expected more than maybe 2 people to read it….

Anyway! Yesterday we went through the final two missions of ACP. We were extremely fortunate to have caught the tail end of another group making their way there and hadn’t had much trouble around the seed spawn areas with Gobs because… well… there were none! I don’t visit the old tower often, so it was really nostalgic to go through all the floors while sneaking and being invisible. Made me remember the two times I had to do Rank 4, but worse when it came to the final two floors and Reiokyu (our guide) also had to sneak and invisible.

Our fight set up for the final battle was PLD, BRD, WAR, WHM, RNG, and COR. Reiokyu (PLD) was to tank the seed or something, but to be honest it looked like he was being made into a pinball game. Mekare (WAR) was to take on the copies of us, and Orophen (RNG) and Tamika (COR) was to handle taking down that damned ugly crystal. If you don’t know what a BRD or WHM does, then I’ll tell you that we danced, laughed and had great merriment all to ourselves.

The fight was going well until we hit the time for Judgement and then all hell broke loose. I don’t know all of the spells and abilities being used because of chat filters, but the next thing I knew people were dying or already dead and Mekare’s copy was making a beeline to my doom and destruction. And then… and then! I got turned into a Mandy! *insert squeeing here* The others said I had really turned into the dark side, but you know what? If I were able to, I would so totally try to Head Butt someone without any apologies. 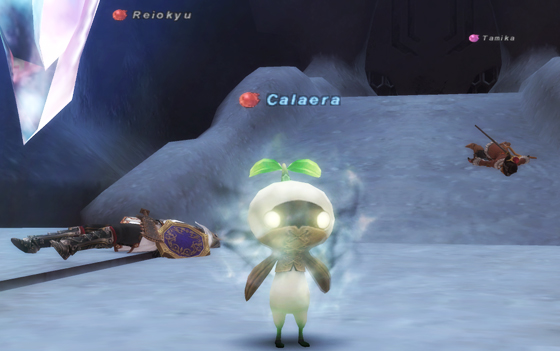 After the wipe, we regrouped and talked about ANNMs but decided instead to do some leveling off of FoVs in Western Altepa Desert. It was level capped at 41, and I decided to switch jobs with Hiroshiko. It was totally weird and actually… not as fun as I think it could have been. Maybe because I was falling asleep or maybe the party itself was making me fall asleep. I don’t know. We managed to get 2 levels for each 40ish leveled person there and the three Taru managed to get one level each. The FoV itself is for page 3 and requires for 10 Beetles to be killed and 1 Cacutar for an added 1k bonus exp, which isn’t as bad as I thought it would be. 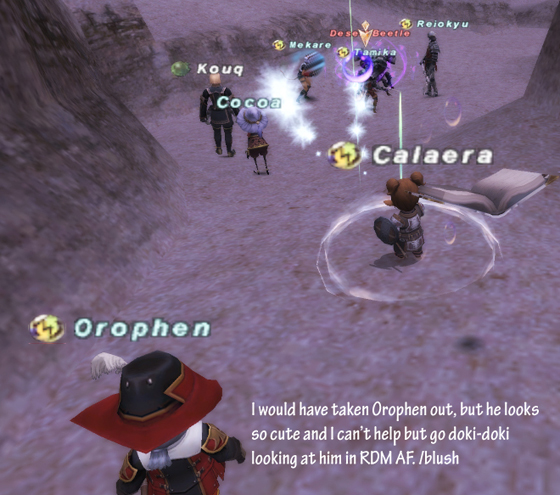 All in all a rather good night! Though makes me wonder if I will ever get WHM to 75 without falling fast asleep…