Last year, I remember doing CoP 4-2 as a BLU and having one heck of a time doing it. Our set up then (for those unfamiliar with my CoP adventures), was BLUx3, PLD, WHM, and BLM. Even though my brother was late, he was one of the reasons I was envious of him: he always managed to save the day with his nukes. Kind of like a super hero, but not as cool since he’s my younger brother.

Since an old friend has returned to the game, we decided to help him through CoP. Unfortunately, he was last on 4-2 and it was the same mission I remember panicking over before and during the mission. But then I remembered that my brother was awesome as BLM, Oro and I had BLM leveled, and proceeded to ask Mekare if we could take BLM instead of BLU this time around.

Now, I was pretty damn nervous. I had only played BLM (recently) just by AMing pets, and the last time I remember playing BLM with other people was… when I started Calaera? Yup. Eons ago. Couple that with some other things that were going on, and I was pretty much a mess going into this. In fact, I don’t even know what the hell got into me when I did this:

Sad, no? Anyway, Oro told me to do light nukes throughout and close up with AM. We talked the guy out of starting out with 2HR and then waltz in doing our job. Unlike last time, there were no deaths and I could actually see what was going on instead of blindly praying “PLEASE DIE ALREADY.” I even landed the killing blow, which was really awesome. Probably not in the same cool and wth’ish fashion my brother did it, but at least it went down by my own hand and not someone else’s. 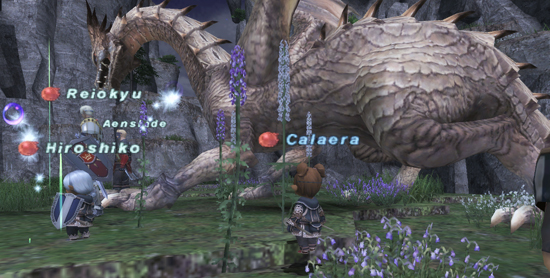 Playing BLM is really satisfying in a way. Maybe because I’m actually seeing myself make some kind of dent on the mob in one huge chunk. I don’t know. Whatever. It was fun and omfg I can’t wait to finish up BLM and do more sexy things. Unfortunately, I won’t get much playtime on July due to real life things, but when I return hopefully I can pick up and finish BLM by the time summer ends. :3