This past Saturday was mostly a CoP 3-3 to 3-5 prep run minus Makai because he has been having troubles (re)installing FFXI. At this rate I’ll need to buy the DVD again so that he can play because I doubt he’ll want to install from my CDs from way back when.

The rest of this entry will mostly be behind a cut as it is both image intense and because its mostly random moments I have shared with my friends. I guess you can say its mostly a sentimental, silly entry versus anything noteworthy. So if you’re interested, then press on my friend!

While running around to do missions, Mekare had decided to have some fun with Reiokyu in Carpenter’s Landing while waiting for Orophen to finish his CSes. Reiokyu, of course, knowing that he would find himself in a sticky situation was found running like crazy all over the zone in attempt to run away from my dear friend. I guess at some point he started to feel tired and commented with the following;

In the end we were able to get him to settle down before quoting the Taru triplets about him being our (the band of Tarutaru in the LS) father and being seperated from Mekare before we were born. To make the event even better, I managed to snag a screenshot of them sitting together!

After we finished 3-3 business, we traveled off to the Northern zones to farm chips necessary for the Diabolos fight. It was frustrating at first, as there was another party farming chips but we managed to have fun in the end and get all the chips we needed for that day (we still need to get the ones for the slacker). Of course, our form of fun meant getting nearly lost in another part of the ruins and then having crazy lots against each other… 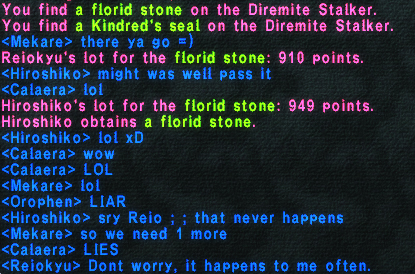 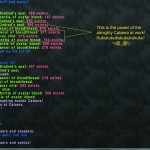 You’ll need to click on that last one, as I had no desire to shrink it down and stuff.

So what is up for next week? Not sure. It certainly depends on whether or not I see the doctor this week or wait till my break two weeks from now. My right wrist has been hurting and my hand is feeling weaker than normal. I’m afraid I might have Carpal Tunnel Syndrome, but who knows?

To close the entry, I have a special clip for my friends on the LS who watch Keroro Gunso (Sgt. Frog) and have played Final Fantasy IX. I would have sent it to them on e-mail, but I figure they will check this out eventually. ;)