Maybe this is my girly side finally emerging, but I’ve decided to get two pink colored things this past weekend. A new linkshell and a new laptop. The linkshell was a spur of the moment deal, as I wanted to see if anyone had taken the name AstralCandy on Ragnarok. Lo and behold, it wasn’t taken and I decided and to color it pink. Still deciding if I should move all 6 regular members onto AstralCandy or just keep theSyndicate LS name. I still have GameOver, too, deep in the recesses of my storage…

The other pink item I decided to get is a Flamingo Pink Dell Inspiron 1520. I’ve been flip-flopping between pink and blue, and decided to get pink since it was out voted by 2 points and because Orophen is getting green. Spring Green and Flamingo Pink look better together than Spring Green and Midnight Blue. Though the laptop has been configured to play some games for now (maybe I’ll be trying out WoW?), the laptop is mostly for school related things and to allow me to work/play outside of my bedroom.

Now onto the weekend stuff!

First, a /wave to Jowah since I didn’t get back in time to do so. I was afk, scrolled up the chat log, and saw that I was waved down. Second, a big thanks to Orophen, Mekare, and Reiokyu for letting me have a cut of their BCNM drops despite the fact I had no participation in it whatsoever. It was a really nice gesture, and I’m happy to have some money in my pockets again! Lastly, I want to thank Mekare for giving me her second Opaline set! I was hesistant at first, but then couldn’t help but think how cute it was after she had traded me the gear. 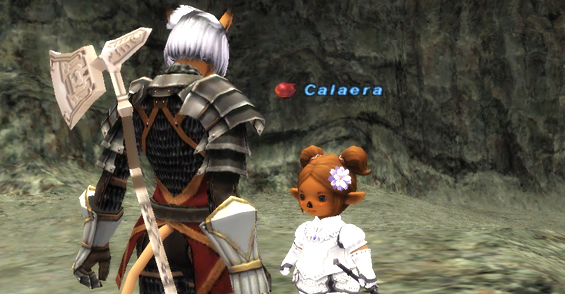 Although I mostly caught up on sleep, I did get a chance to play with Mekare and Reiokyu by poking fun at Reiokyu leveling PLD (last weekend) and then going down to the Aqueducts for a good few hours. Now, I wasn’t going to post the screenshot I am going to post now, but because a certain someone claimed vengeance on a Tarutaru Fomor MNK smacking my head while I was resting? Yeah.

Don’t talk about vengeance when I have photos of your ass in metal underwear, kk?

Anyway, in the Aqueducts, we ran into the NM Mahisha. We were poking at it for awhile (killing off the PLD and BRD Fomors), before finally deciding to give Mahisha a poke. According to some other sites, it is killable by either two BLU/NIN, soloable by a BST, or will need a party of 6 or more to kill it off. Well, since the update for 2handers, we found that you just need 2 WAR/NIN (one was level 40 and the other 39) and a WHM to kill it off. 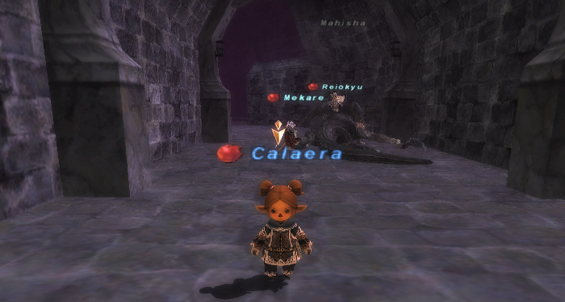 I died mid way into the fight with a one hit KO. My fault for having less than 400 HP, and a ton of MP to help along our small party. Anyway, we didn’t get many drops that night except for a lot of dark crystals, maybe a bronze key, less than five beastmen seals, and two Shakudo Ingots. A pity… but it was still fun dusting out my WHM and knowing that I can, at the bare minimum, keep my party alive. Maybe it will push me to get to 60 and then maybe to 75 before Hiroshiko does. ;o