A busy day to make up for a lousy week due to problems with Orophen’s installation and what not. I finally finished Divine Might (ZM 14), made it in time to participate in Campaign battles, joined a new linkshell, helped some people, and toured Orophen through as much of WotG as we could. Whew! Read on to see the screenshots and more:

Earlier this week I was utterly frustrated with Campaign. A lot of people have talked about it, praised it, and so on and so forth. Me? I wasted what little notes I had trying to chase one down to participate, only to find that I would make it in time for it to end as I made it into the zone. Feeling very discouraged, I was finally happy to have been able to participated in one and then another and then another! I didn’t think it would be as much fun as Besieged, because there weren’t even a lot of people around. Then people would start to trickle in, armies would come in, and attacks would get really insane! Sometimes it was a struggle to keep our heads afloat so that reinforcements could help us out and level the battlefield, and sometimes their presence was too overpowering. Regardless, it was a lot of fun and a quick, fun way to earn some exp. I’ll definitely be trying it out more, and attempting to cap out my BRD’s exp that way vs. joining random parties.

On Saturday morning, I woke up early and started prepping myself to head on over to do Divine Might with Mekare’s LS – Musketeers. I’ve wanted to do this quest/mission for awhile, not just to have it done or to get the earring but because it seemed like a lot of fun. Hard work, but fun! It was definitely both, despite having lost our first round. We learned, reorganized, and went back in with a much more successful run! We followed a customized strategy that Tyrian had explained to us, and it worked out pretty well. Being a BRD, I didn’t do anything fancy but sing and cure people. I also got trampled on a lot, being one of the few Taru present. Mekare, on the other hand, massacred a truck load of people and even stood chummy with the Crystal Warriors while the rest of us lay dead and sprawled about the area. Thankfully, I wasn’t killed by her, but I do feel sorry for the many people she managed to just stab to death before we were trying to find a way to escape her traitorous escapade! It was all good, however, because the Crystal Warriors ended up stabbing her to death when they found she could probably kill them all in turn. Beware! Mekare is actually a fierce Mithra in disguise! RAAAAAWR! 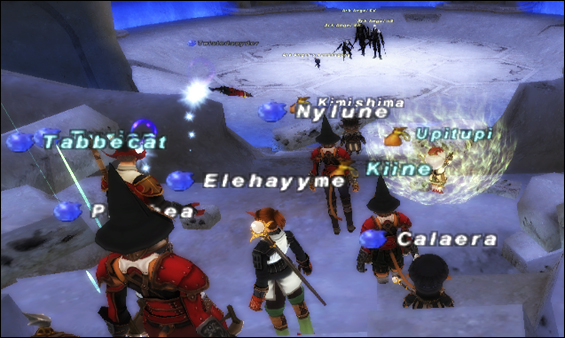 After we left, we found that Light Weather was upon us and it was almost like the heavens were smiling down upon us for having done so well! I am still sorry for my friend, whom I feel was probably wanting to dig his claws into my back for getting to do this run. While I am very happy and very grateful, I hardly put as much effort as my friend… heck, one could probably argue that I hardly try at all. Which I feel is probably true at times…

That aside, I’m also happy to have been invited to stay in Musketeers after having been given a pearl for the event. Most of the other shells I’ve had were mostly social, so one that has planned events is a little nicer. I like schedules and times. It helps me plan ahead and not scramble to get things done at the last minute. I’m still holding onto theSyndicate, however, because I need to be able to harass my brother, Hiroshiko, and Reiokyu easily when we do CoP missions and the sort. I also need Smurfs in order to harass a few select members…

So, you’re probably wondering, at this point, what earring did I choose for Divine Might! I’m doing a lot of rambling, I know, but for those interested, I decided to choose this one: 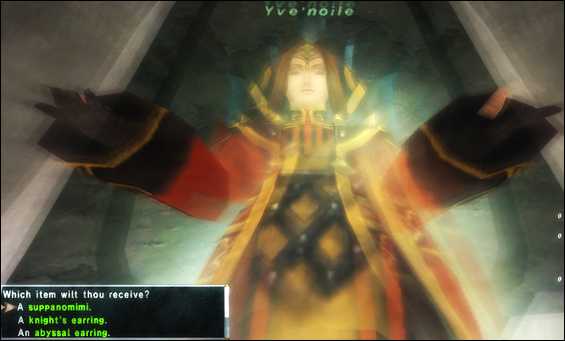 I figured it might come in useful for the things I plan to do in the future, if I ever get around to them. Plus, I couldn’t see myself really using the other earrings for other things, so this was the only choice really left for me.

I also finished what WotG missions are out there, more operations, and several Campaign battles. As I’ve said before, I am really liking the expansion so far. Yeah, there isn’t a lot of content out there, but that’s really OK with me. I have a lot of other things on my plate, and I don’t need to be overloaded with missions that I probably won’t be able to finish until I’m 50. The key things that really has me liking the expansion:

I’ve always wanted to be able to know what happened in the past, and I’m really glad to be able to see that for myself. I am especially excited to see that some people (either solo or in small parties) are leveling in the past. This has me really excited and very pleased. I’m looking forward to finding mobs that my BLU team can tackle, and to finally reach our goal of end game BLU. I know we’re taking long in getting there, but hopefully it won’t take so long since Orophen has finally fixed his installation problem(s) and our interest in BLU has been renewed. Of course, if Orophen is actually SERIOUS about his leveling RNG to 75… well… we’ll wait and see!