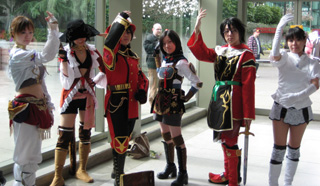 FFXI Cosplayers from the Bahamut Server

Not so much an FFXI update as it is a Sakura Con 2008 and video game update. The con itself was a lot of fun and I had the chance to see, do, and meet several people at the convention. If you’re interested in seeing some of the cosplayers I ran into, you may view the photos I have posted at Livejournal. However, you must be a registered user of Livejournal in order to view them.

If you are also interested in Ali Project, you may watch a clip of a piece of the concert I have recorded here:

The Penny Arcade crew was also at Sakura Con and handing out free waffles and ice cream. Not just any ice cream. Chocolate ice cream! I wanted some (free is always good!) but everyone else beat me to them each day they served them. ;o; I may be making plans to attend PAX since I will not be traveling to Vegas this year, so if anyone else plans to go… let me know!

As for new video games, I started to play No More Heroes on the Wii. Its usually not my type of game, but my friend says it is really good and I try my best to try new things once in awhile. I’ve only gotten up to 10th ranking so far, am playing Sweet mode, and generally really suck… but I kind of like the crudeness of the game. Its art style reminds me of a comic book (though just the start of it… I haven’t gotten very far at all), and the fighting is alright. Though I wish I could get the hang of the upper and low attacks (I only got them by chance). Its also hard to fight when blood is covering 80 – 90% of the screen and you can’t see much else but blood, body parts, and coins. I think the later part amuses me most since its like a bloodied version of Mario breaking boxes to get coins! I’m not sure if I’ll continue playing it, but I guess I will dabble in it once in awhile before I give it back to my friend next week.