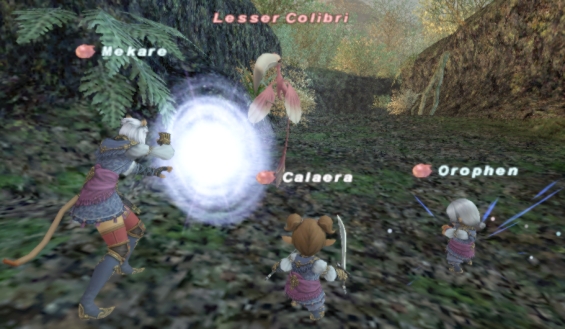 This is pretty much straight forward. The sad thing is, we aren’t able to successfully pull off a self skillchain… yet. We’re working on it, and I will most likely talk to Orophen on ways to both pull off a self renkei plus keep chain flowing smoothly. Let me say that Wizard Cookies + Dark Staff is a GOD send before Vermy. In fact, it is still a great combo even if you don’t have one (which Orophen doesn’t).

Despite some heavy competition, we managed to find a nice little camp where we were hardly bothered. Which is kind of hard when competing against typical leveling parties. Usually they are much faster than we are, and we struggle to keep up. We had no problem this time around and were able to keep our own set of mobs apart from the other two parties that were near us.

I also have screenshots with us posing in full AF, but with WordPress not wanting to cooperate those shots will have to come a little later. :

Now that we are level 60, CoP is going to be coming at full swing once Hiroshiko has moved into his dormitory. We’ll be picking up where we left off (the Three Paths) and plowing our way through as fast as we can now that we will be doing Besieged frequently in hopes of learning a spell or two without having to subject Reiokyu with the torture of putting his meat shield skills to the test. ;o