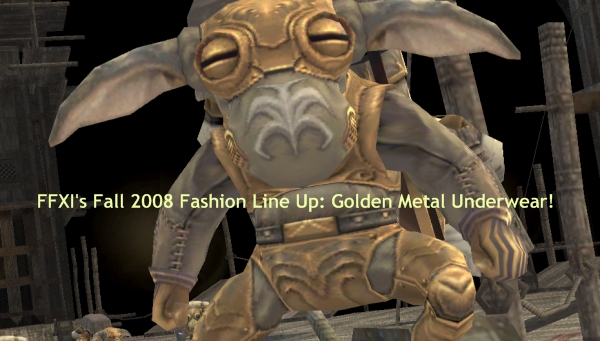 Since overcoming our hurdle of getting to BLU 60, we picked up where we last left off in CoP: the Three Paths. I am probably going to remember this as the mission where I had to sit and watch CSes at least twice because of my lazy younger brother and then at least a third time because Orophen’s connection was down the night prior to our organized meet time.

I let Hiroshiko lead this time, kind of because I was sick and partly to let someone else have a hand at it after being teased about being a dictator. Of course, then the boys decided to cry foul since the ONLY person I seem to treat with any kind of affection (that doesn’t involve violence, pfbt) is Mekare. Which TOTALLY isn’t true, but I will let the boys believe what they will- they will know true fear when it comes back to my turn to lead.

Already a little more than halfway done with CoP, I can honestly say I know I am going to miss CoP when its done and over with. The days we were able to meet and do missions was always exciting and filled with anticipation of what will come next. Its great that even Meka, who had already completed CoP, is excited to join us and do battles with us. Its this excitement that always makes me so damn excited, and I hope it can pass onto ToAU when we try to finish that together! Though I think most of us are on the verge of a panic attack at the idea of the big air ship battle that is coming up…

Of course, now we can hopefully (if my brother isn’t a douche), party together with the new LEVEL SYNC SYSTEM!! OMG! Will it mean additions to our BLU setup? Maybe. Maybe not. It will definitely mean we can probably level up other jobs we have been wanting to level up but couldn’t because of level discrepancies and for that I’m grateful for! :D