The Return of the BLU Set

On a whim, I decided to get Orophen and Mekare together to level our BLU. At first we weren’t sure it was going to last very long because Mekare was tired and I was feeling pretty medicated at the time. There was also the fact I was supposed to be laying down most of the time, but don’t tell my doctor I found a way around THAT little detail!

At any rate, instead of subjecting Mekare and Orophen to my bout of “hey, lets see if THIS camp works” and find out it doesn’t, I decided to go out while they prepped to see if Yuhtunga Jungle would finally be a viable option for us. Now, for months the place has been empty. It would be a miracle if I see ANYONE leveling there at all! Yet lo and behold, the day I want to try and level there? Camps all around and the ones open to us? Not exactly the best spots to level in (not when one factors in an IT Goblin…).

Instead we decided to venture to Bibiki Bay, killed one rabbit thanks to Hiroshiko, and then teleported to Altep to head into Korroloka Tunnel. Now, if I didn’t state my love for the NEW Signet changes let me state them again: SIGNET, I LOVE YOU.

We didn’t take any juices with us and fought Clippers and Greater Pugils that ranged anywhere from Even Matched to Incredibly Tough. Highest chain? Level 4 (maybe 5, but remember: I was medicated). The best thing, however, was keeping our TP and having an extra EXP bonus for the mobs we were killing. Though it seems small at first glance, the numbers really add up in the end. We had found this out when Mekare let us know that she had forgotten to get Signet after some time. That whole time we were there? We managed to get 300 or so EXP more than she did. That is quite a chunk when considering how tightly we try to keep our EXP together!

Orophen because of reason’s I cannot remember, has put off RNG for awhile now but has wishes to take it up again. The thing is, he wants the pretty stuff that I am sure other RNGs want but is too cheap and busy to get. Until we find out that we can get at least one of his really cool bows by killing the NM. No problem, right?

Sometimes I wonder why S-E doesn’t just make Rare/EX items 100%. Especially when said mob likes to spam an ability that can cure itself for 1100 HP or more. I am sure it wouldn’t have been so bad if we had more people helping us or the right job or whatever. But all we had was a 60-something RNG, 75 THF, and me the lovely BRD. 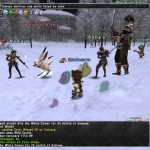 Our first fight and we were so clueless about how often that thing would spam Wild Carrot. It was INSANE. For what seemed like forever, the White Coney’s HP was hovering between 80-100% and never lower. Decided that despite Mekare’s request for something similar to Haste, Minuet was our best option and then followed it up with SV + Double Minuet when the fight was starting to drag out for awhile. The last thing we needed was Raptors biting our butt while we were trying to take the Coney down.

Too bad we ended up with nothing…

Tried a different tactic and the fight went a lot smoother than the last. We had trouble in the end, but it went down and well… we still got nothing. Cue in angry comments via LS from the girls while the men just sat there and listened.

Changed camps to a place that was more rabbit infested, and then proceeded to beat down on the Coney once more. It was a much shorter fight than the previous two, but still considerably long as the rabbit enjoys spamming Wild Carrot every chance he gets. For the longest time I thought we would NEVER see its HP dip below 20 – 30%. Orz Result on this one? Again, nothing.

I had gone to rest after this point (health concerns), but I can’t help but feel annoyed. Then again, it makes me realize why I don’t NM farm in the first place. I know its all chance and yada yada yada. Still… it boggles my mind when something Rare/EX isn’t 100% or close to. I mean, what is the point of having the drop rate be ridiculously small if the person is not able to SELL the bloody item? If they went all the way out to such a ridiculous place, popped the mob, and then suffered through its stupid healing skill… I think they should deserve that bow. Its not like they’re going to go selling it anyway! Meh.

Anyway, I close with a ridiculous chat log between my friends and set members: 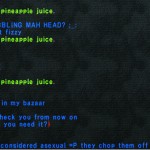