Oi! What a busy weekend! All of it was very exciting, despite the few frustrations that we ran into as we tried to get a few spells as we leveled. We started off the weekend with a run to Gusgen Mines in an attempt to get Poison Breath. Orophen had gotten it for me as his RDM, and I was returning the favor by getting it for him and Mekare on my BRD. And while I am a level 74 BRD, I should remember that I am also a sweet tasting morsel for all monsters alike. Pulling too many mobs can tend to tenderize me nicely, and it was while I was getting beat up on that I forget Stoneskin! Doh. Made my life a whole lot easier when I threw that up and continued to Dia happily while people passed us by and looked at us strangely..

After working on getting Poison Breath for awhile, we made a trek back to San d’Oria and to Carpenter’s Landing to get Soporific. I will say now that I will always remember this spell as being a super pain in the ass. After one or two kills, Mekare and Orophen managed to get it with ease. Me? I had waited hours a few days prior and still had to kill countless more before I finally learned the spell. It almost made me wonder if there was a “Hooked on BLU” book to help me learn spells and not hold back the rest of my party. We quickly got to 19 that day, and then asked Reiokyu if he could help us get Screwdriver and Bomb Toss. Both spells you would think, “Huh, those should be easy! There are lots of Gobs and Pugils in the Dunes!” Too bad it didn’t work out that way, and we ended up spending a good chunk of time trying to get these spells, too. Though, it didn’t help when Reiokyu would kinda… well… beat things up to death before they could use their WS. 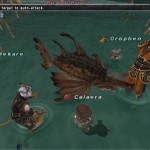 We didn’t go at it too long on Saturday, but picked up the pace again today by scoring two levels in under an hour. Orophen had suggested we go to the Dunes because he had logged out there, but I was against it for several reasons and suggested we go to Korroloka Tunnel. Going to the Tunnel versus the Dunes was probably the best idea ever, and it made me wonder why I didn’t think of it sooner. The exp we were getting was amazing and surprisingly easy. If the worms weren’t conning Even Match by the time we were 20, I think it would have been in our best interest to have stayed there versus attempting to go to Qufim Island. But, hey, we were cocky and feeling very good about our progress.While we did feel we could take them on (and we could), we had to remember to have done a proper /sea of the area. I think if we had done that prior to leaving for Jeuno, it could have saved us the headache of the level 25 RNG being PL’ed as he decimated everything in sight. /sigh So off we went back to the Dunes and tried for round 2 at getting Bomb Toss and Screwdriver for Orophen. We had about an hour left at this point, but managed to get another level simply chaining kills like crazy. 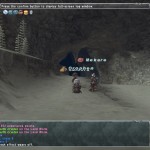 At this point, I’d like to add that Mekare has been making Yagudo Drinks and Pamama Au Lait for herself. She runs out of MP rather quickly, and I currently have the highest with 256 MP at level 21 with /whm and a few MP boosting equipment (sans Astrals). She has also been eating Meat Mithkabobs while Orophen and I have been munching on Sheep Jerky that she had made for us when we first started out as a BLU set.

After getting level 21 and going back to Windurst, we met up again a few hours later to try a BCNM 20. Money was dwindling due to our drink making sprees, food, equipment, etc, and we wanted to see what it would be like to do the BCNMs as a set of BLU. It took us about an hour and a half of preparation (muling, discussing tactics, travelling, etc), and a total of 4 minutes and 10 seconds to actually beat our BCNM of choice: Wings of Fury. Our set up and battle plan was as follows:

The other spells set were of our choosing, so the others had variations than what I had chosen. Mekare and Orophen had gone in as /WAR while I had gone in with /WHM for Protectra. We all buffed up and ate foods (all of us ate meat dishes for attack purposes)/drinks (Yagudo and Pamama Au Laits) before Orophen and Mekare went in to voke the Furies. With Azure Lore up, I slept on the first round and killed whatever monster Orophen had targeted first (Furies) with the rest of the sleeping order being followed up by Mekare and Orophen rounding off the end. It started off shaky as Orophen’s HP quickly dropped to 40 HP before we could even attack. Hi-potion quickly took care of that and we went to work. It all seemed like a blur after this because it went by so quickly! In total, we used up this many meds:

And that was it! I had spammed Healing Breeze every so often, but that was about it. We went onto the giant bat and he was dead in almost an instant. To us it seemed as though we were partying and chaining two Tough mobs and finishing off with an VT or IT. It was that easy. The clear time before ours? That was 6 minutes and something seconds. Too bad the rewards weren’t as great as the performance, but that’s ok. We plan to try out other BCNMs in the future and see how well we do on those as well. 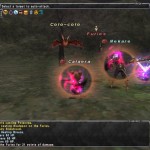