Ever since I had heard about this game sometime last year, I had been interested in trying it out since the concept at the time seemed really cool. Angels vs. Demons or rather Elyos vs. Asmodians, aerial combat, and drop dead gorgeous character customization was what had piqued my interest during a time when I wasn’t sure about how I felt about FFXI last year. Though the concepts and mechanics are the same as in many other MMOs (and many WoW lovers will spout off incessantly like mind numbing drones that not only it is a total and complete ripoff of WoW but that Aion sucks in comparison) with action bars, fetch and retrieve quests, missions, and the idiots flaming the chat logs, there are some parts of Aion that are rather charming. 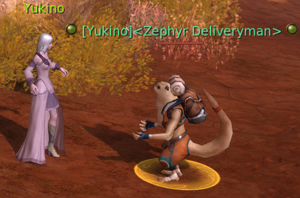 I have played from closed beta, a little through open beta, and now retail release, and one of my favorite aspects of this game is the self skillchain like attacks one gets to pull off along with the coupling of aerial attack in permissible areas. It is also probably the only game that has remarkably hasn’t left me wanting to stab myself for going through the annoying grind of 1 – 10 no matter how many times I do it. Another neat feature of the game is that there is an express delivery function that allows for a deliveryman to come to YOU. That’s right! It comes to you even if you are right smack dab middle in enemy territory! All that is needed is to click on the mail icon on the UI and out pops a furry little man with your mail! No more having to go all the way to town just to find a mailbox and get the goodies you have been waiting on!

Of course, there are some downsides to the game…

Some small (or big) things that have made playing enjoyable…

Am I going to keep playing after my 30 days? Maybe, maybe not. Depends on if Derrick is still interested in playing or if I don’t get drawn into something else. The PvP aspect of the game has left me a little hesitant to continue, but it doesn’t mean I won’t at least try it out. As for others looking into trying the game, the game isn’t for everyone. Personally, I have found many WoW lovers have frothed at the mouth angrily and say they detest the game in chat and on forums, whereas several FFXIers say they are happy campers with the game, and those who play both will still complain WoW is better. I, uh, don’t really fit anywhere as the game is just a time waster (like WoW) until FFXIV comes out or until I decide to return to FFXI, but I neither hate nor truly love the game. I just have fun and that’s all that matters to me.

Even though I have been doing a lot of gaming here and there by playing Dissidia, theSims3, Aion, WoW, Rock Band, and Guitar Hero, I have also decided to refocus on my health and well being after finding myself gaining an alarming amount of weight back after my Gall Bladder surgery awhile ago. So, I decided to try EA Active (again) for the Wii and doing other exercises more seriously in attempt to get myself back in shape.

Now, before I was kind of hesitant about EA Active. Not because its a video game exercise, because I had actually done well before doing a lot of DDR until my DDR pad became busted and I got tired of all the songs. No, my worry was that it was like some of the other hyped up Wii games that really don’t amount to much after awhile. Wii Fit was hard enough to include as part of my workout routine because it wasn’t really set up to be like a set of workouts. EA Active on the other hand, is a completely and totally different story!

I had actually did a bit of it before Hiroshiko and my cousin had come to visit, and didn’t realize that there was a difference in the settings. I had picked out some regular “Easy” workout mode, and found myself unable to properly sit or walk for an entire week. In fact, in order to sit on the toilet I needed to perform some sort of acrobatic trick in order to sit down and then pull myself into an upright position like like a hobbled old lady. It had kicked my butt THAT much.

Then my friend told me about the 30 Day Challenge with Bob Greene. Boy did that make a butt load of a difference! I didn’t have as much trouble, but I really did work up a sweat! And after doing it for awhile I can finally work my way back up to a more intensive setting while also keeping track of what other exercises I have done and what I had done diet wise to help keep myself healthy. I had also decided to supplement my workouts on that game with doing more things such as walking, jogging, etc. I have already trimmed up a little, but more importantly I feel much better since I had reintroduced exercise back into my life. Now I just need to work out more so that I can one day squish Hiroshiko’s head in one go and make myself some delicious tasting brain juice~ <3