We didn’t really get this level via normal means. We got this mainly through killing things for CoP missions in both the Aqueducts and in Riverne – Site #A01 by farming items such as keys, subligar, scales, and spells. 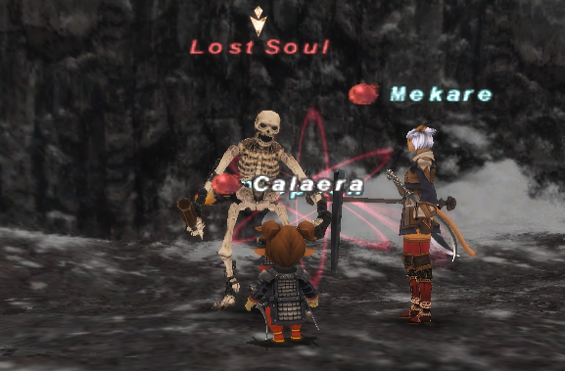 Last Saturday, July 28, Mekare, Orophen, and I went on a short EXP session in Behemoth’s Dominion. Our target was primarily Lost Souls with the occasional Demonic Weapon tossed in there. This camp is really not for the faint of heart. It is easy to get into really deep trouble if you’re not careful! You need to be careful of pops, where you are camping, blood aggro, and most importantly – KEEP YOUR SHADOWS UP. There is also the fact you are trapped between undead, bats that are still capable of aggroing you, and a long run toward the exit. The good news? The undead are easy targets and its fun to see the damage numbers climb higher and higher as you go. Bludgeon, Jet Stream, and Smite of Rage are all very good spells to use against them. Bludgeon is capable of doing up to 200+ damage, and Jet Stream can take you as high as 300+. We had to take extra care not to engage scythe wielding undead, but there were times when a certain someone would blatantly ignore that rule of thumb anyway and attempt to melee them anyway. *cough*Orophen*cough*

Onto other news, the FAQ page has been added. There are only three questions on there, as I don’t get much more than those three. Orophen/Derrick will also be visiting at the end of August/early September, so we’ll be taking off for a few days to spend time together when that time comes. （＾3＾）☆Chu！

I’m not really back, yet, but I was able to spend a short time online to gather BLU spells and then skill up with Mekare. Because I’ve been spending most of my time working and taking care of my family, this had really been the first time in awhile that I was able to play and find it enjoyable. I do not hold resentment towards my family because of the situation we had found ourselves under, but I do have to admit it has been a very stressful and trying time for these past few weeks and I’m glad to have finally found a little time to relax and be at ease.

For awhile, I had been on with the intention of going AFK and just letting Orophen get my spells. We managed to get Blitzstrahl, Mysterious Light, and Awful Eye with the additional help of Mekare and I managed to finish some neglected assignments before focusing my attention on a duo’ed skill up session with Mekare in the ol’ tree. Before we headed there, she graciously used her pop item to get me Hornetneedle and make skill up a little more bearable with its low delay time. Thanks to her, I was able to get about 20 levels on my dagger and get about 15 levels away from Evisceration. Yeah, I know, I’m far behind on my weapon skills, but I never really had the need to use them until Orophen made the suggested several times to myself and then to Mekare.

In the next update, I’ll try to answer a few frequently asked questions regarding my screenshots, my computer set up, etc. Right now, I need to get back to reading a few books and doing more homework…

With things being the way they are in real life, FFXI will be taking the back seat until things are doing better on my end. Many apologies to my friends and LS mates who were looking forward to more CoP missions or BLU leveling. I really wish I could do those things with you, but I have real life priorities at the moment that take precedence over anything else. I know you guys will understand, but it still bums me out as FFXI would have been a great stress reliever from an otherwise very stressful situation. I’ll be on once in awhile but I cannot commit to anything until I’m certain that things will be ok with the current situation dealt upon me and my family…

We decided to do this run since we had already completed 2-3, and managed to get everyone together 30 minutes before our required meeting time. Sweet!

END_OF_DOCUMENT_TOKEN_TO_BE_REPLACED 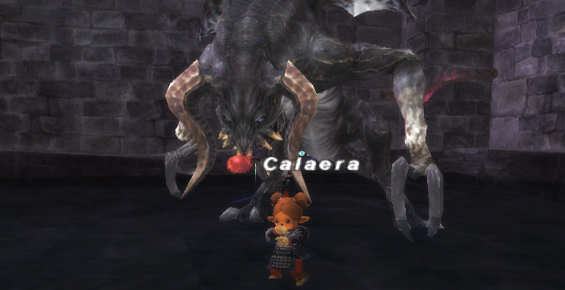 For all those who doubted, questioned, or even told us to get our butts in an alliance, I have for you a quote from one of my favorite video games, Phoenix Wright: Ace Attorney:

That aside, we had finished this run ahead of time because we didn’t know it would be so bloody easy to kill him off. We had gone in with the intention of doing a dry run and get people acquainted with our friend, and the next thing we knew we had killed the bloody bastard. More amazing is that we were pulled in earlier than we wanted, as I was still waiting for the one minute cool down after setting BLU spells.

The first run was completed with only five people (Hiroshiko – WHM/BLM, Makai – BLM/WHM, Mekare, Orophen, and myself) and the second run was finished shortly afterwards for a second time to include Reiokyu – NIN/WAR. This made our party of 6 complete and allowed me to go back and come back with the Bronze Key to finish the mission completely.

Seeing as this was a dry run, we had no medicines or drinks. We simply came in as we were, ate food, and used sneak oils were necessary. It was the easiest run ever, and it made me wonder why I had to suffer through going in with an alliance. My nightmare of going into it last time was spending hours getting lost trying to find the right library and one or two people dying during the Minotaur fight. No deaths at this fight, and getting lost? Never! At least not on Mekare’s watch!

Orophen noted that the highest recorded damage was done by me at about 195 on Jet Stream. This was done during our first run, and he went down relatively easy. Second run wasn’t as easy (he kept spamming Mow this time around), but we were still able to take him down and not suffer the same headaches I had to deal with when I first came here long ago.

Oh, and before I close with screenshots: Eba is a puntz. If she hadn’t killed Orophen and me, it is in my belief that she could have gone down by our party of four: Enkidou (THF) and the party of three BLU. We brought her down to 50% before licking the dust and watching as Mekare was able to take the last stand against her. <3 Mekare

END_OF_DOCUMENT_TOKEN_TO_BE_REPLACED

I’ve been meaning to post this for a long time, but I kept forgetting to do so. So, here is it! My friend code for Tetris DS:

If you add me, please drop your friend code as a comment. Orophen sucks at Tetris, and so does anyone else I encounter in real life. Which is sad considering my score isn’t anything really remarkable to begin with (224 wins out of 387 battles and a rating of 5947).

I haven’t really blogged about it before, but 35-37? Still in Eastern Altepa Desert. Those Beetles and Dhalmels? They last a LONG time. Which is why I didn’t really feel like blogging about it before, because really? That area is like my playground and has been every time I was in the 30-35 area. 37-41, however, is another trip altogether. It had both good and bad points to it, with the good points happening mostly for a bit of 38, most of 39, and all the way up to 41. 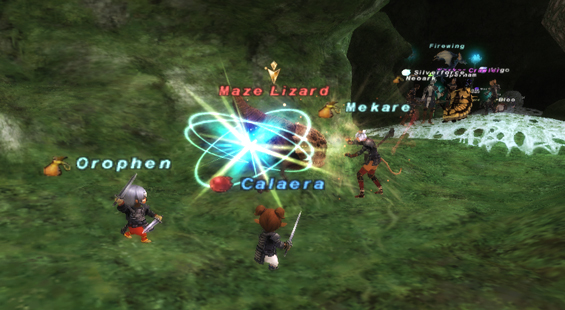