Since the arrival of my cousin, I’ve found myself increasingly busy. Not that its a bad thing; in fact quite the opposite! Because I am often busy trying to juggle several things at once or think of ways to entertain my guest, I’ve found that it has kept me from dwelling too much on things and succumb to depression. Too much thinking = depression or anxiety or what have you. Of course, the downside is sometimes not having enough down time for myself to do the things I need to do, but its something I am feeling quite content with. Probably the only constant thought that has been plaguing me is being unable to contribute enough financial resources, but I am going to hopefully be able to recoup the losses if I can land the part time jobs I’ve applied for. Here is hoping!

So far, everything has been going pretty smoothly. I say this because at times my temperamental sibling can often really drive a rift between parties with her anger management issues, and it has been the case during previous visits from my cousin. Thankfully it hasn’t scared her away 100% as is proofed by the fact she came to visit us again this year.

This year, we had even done something I never once thought I would do or enjoy doing: ride a duck. Now this might seem strange and you might be asking yourself, “Calaera, how on earth are you able to ride a duck!?” Easy! By riding one of these: 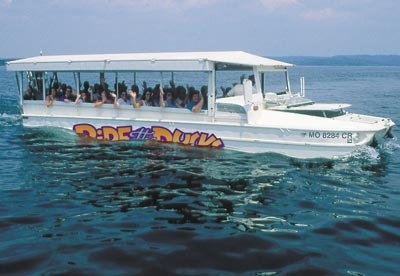 During my time working in Seattle, I had often seen these vehicles and the faces of the poor tourists who looked embarrassed to be sitting with people daring to sing, dance, clap, scream, and wave at nearby people who are either in their car or out or even on another duck vehicle. I swore that I would never ride one. It seemed silly and ridiculous and really weird. Then, of course, I was given an opportunity to ride one this month. Typically I would have said no but the choices left to me by saying no left me were less than desirable and I decided to ride without shame and even touting a loud and very annoying duck whistle. The ride itself was actually enjoyable. Silly? Yes. Embarrassing? Without a doubt! Fun? Most definitely! I actually learned more useless facts about Seattle, Sleepless in Seattle, and found other little areas that I had trouble finding on my own during previous excursions. Would I recommend it? Yes! But if you are in town and want to ride it, definitely take it from the West Lake center. They allow more time to float in the water and are able to talk about more interesting trivia info that you may not have otherwise heard on the Seattle Center location.

I also had experienced my first 3D movie at the Seattle Pacific Center IMAX theater and was sorely disappointed and also justified in my view point of the uselessness of 3D. We had seen the last Harry Potter movie a few days ago (Harry Pottery and the Deathly Hallows part 2), and I had suffered through too many cons to actually find the 3D experience worthwhile. They were:

1. Eye Fatigue
2. Lack of meaningful 3D moments. The instances they did use 3D was very short and few and far between.
3. Made me feel more tense because of the constant eye fatigue

Ok, so that was just three points I was able to make and I will make the concession that I realize that this movie in particular was probably not the best way to experience 3D for the first time. Yet even knowing this, I doubt I will really want to experience a 3D movie again. It is paying extra money for watching a movie that is often not originally shot in 3D and has the effects tacked onto there as an after thought. What do I get out of it? Eye fatigue, physical stress from trying to continually adjust to the glasses, and then the realization I paid a few extra bucks for an experience that leaves me walking out of the theater wishing I could have been able to watch the movie in 2D instead and without the feeling of wanting to gouge out my eyes. Whew.

Aside from the awful experience, the movie was great and has me feeling sad that the series has now come to an end film wise.

I would honestly like to write more at this point, but I know I should start heading to bed. The weekend will be kicking off to a Jazz concert at Benaroya Hall, a day of racquetball and maybe badminton, and a two day visit to Victoria, BC. Exciting, no?

The title cannot be as straightforward as it is and is the primary reason for me being in Ellensburg since yesterday. As of Friday 22 July, 2011, I have been laid off due to the fact my school no longer has enough students to support the large staff. It is something I have very mixed feelings about considering I had:

a.) Knew that there was a strong chance I was going to be let go.

b.) I am not as passionate about teaching as I used to be.