Anyone who had read my blog when it was known as doink! will probably remember the banners I used to have depicting my battles with giant Mandragoras. I LOVE Mandies. I love them to bits! I had always thought the best HNM that could ever exist would be a Mandragora. Just imagine if it kicked you in the face!? Or if it used Dream Flower to sleep half the zone? If anything, I think it would be the coolest thing ever to exist! So I was pretty stoked when Kyoshin invited me out with TTGL to kill Chloris. Although I mostly sat and watched, I couldn’t help but feel giddy and excited. Pink + Giant Flower + Mandy = LOVE Just thinking about it makes me extremely happy and excited, and just in absolute LOVE all over again. Thanks again to Kyoshin + TTGL for allowing me to watch Chloris fun! :3 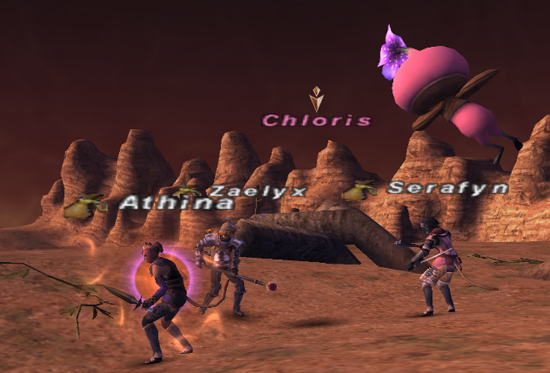 Needless to say, I have already bugged Orophen/Derrick to make me a new banner with Chloris in it. I <3 epic battles with me and Mandy. If only they brought in the other varieties of Mandragora from FFXII. My world would be utterly complete then! As for this weekend, I have been frustratingly trying to learn BLU spells in Promyvion areas. Yet no matter how long I spend in there, I can't seem to learn anything. It has gotten rather frustrating and if it weren't for the fact I am taking it into Dynamis... I would be apt to just not try for awhile longer. I'll probably go at it again tomorrow, but that will depend on whether or not I am feeling any better. Staying out in gusty 20 degree weather for long periods of time wasn't exactly a great idea for someone with as bad asthma as I have. : Despite my frustrations with trying to learn BLU spells, I have found that working on BLM has helped to alleviate my annoyances easily. I'm still far from being a decent BLM (I still have merits, gear, and skills to work on), but I'm pretty happy to see my damage spike at times. Doesn't seem to want to do so all the time, but I will take what I can get:

For the most part, I am able to solo dolls out in Altepa but… eh… I am tempted to stop accepting party invites out there. Its so horribly over camped and people who go out there with 30 minutes remaining is just kinda eh. Because then the PT leader gets antsy, people are cursing, and ah… I just don’t wanna deal with that kinda mess. Reminds me a little too much about work in some regards… After tonight, however, I may just end up being forced out of BLM. Seems like the seals that love to drop for me are the ones I need the least at the moment. I have plans for Orison, but seeing it in the lotting pools in abundance is darn frustrating. Couple that with the fact Orison feet dropped after killing Gieremund? I think the game is strongly hinting at something here… Orz